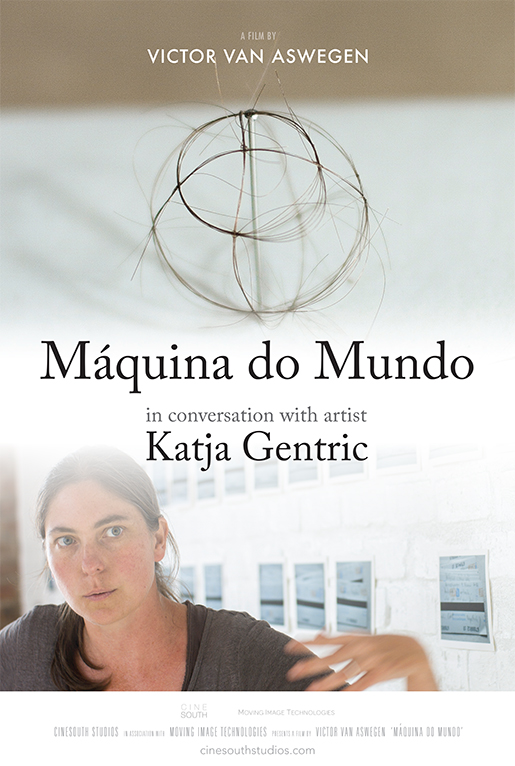 Paris-based artist Katja Gentric shares images and fictions, insights and observations dealing with disorganisation, order and the nature of complex systems, the tension between the finely honed, sophisticated systems of contemporary society and the ever present, pervasive sense of danger and the possibility of catastrophe.

Os Lusíadas, the epic work by the great 16th century Portuguese poet Luís de Camões, culminates in a climactic vision. Near the end of the 8,816 line poem, a grandiloquent celebration of Vasco da Gama’s momentous feat at the turn of the century in discovering the sea route round the Cape to India, a goddess takes the explorer by the hand and from a summit reveals to him a striking image: máquina do mundo – the machine of the world, the structure of the universe. The globe can be seen as a whole, the workings of the universe have become comprehensible.

A key moment: the globe in its entirety becomes something that can be conceived by human imagination; intellectual grasp and practical mastery of the world have been achieved. The chaos of sense impressions and experiences has been distilled into a discernible, explicable and manipulable system. Humans have gained control over the forces of nature, the planet has become navigable, and globalisation has begun.

With a Doctorate from the Université de Bourgogne, Paris-based artist Katja Gentric straddles the spheres of art history, theory and practice, and her work, multilingual and multifaceted, spans continents and cultures. As artist in residence at Hoofstraat Conceptual in South Africa’s Western Cape province during the southern-hemisphere summer of 2016/17, within driving distance from the Cape heroically rounded by da Gama half a millennium earlier, she chose to work with Camões’s notion of the máquina do mundo.

Filmmaker Victor van Aswegen spent the last day of Katja’s residency with her in the gallery and studio spaces as she articulated the thinking underlying her wall installations and spoke about her works in progress. Erudite and playful, with verve and humour, she shared insights and observations, images and fictions that deal with disorganisation, order and the nature of complex systems: the moment when some form of coherence or organisation sets in and chaos becomes society, or vice versa, and the tension between the finely tuned systems of contemporary society and the ever present, pervasive sense of danger and the possibility of catastrophe.

A line of ants, as a system observed from the outside and photographed, and the various vocabularies and layers of meaning that can be brought to bear on it. The Paris metro as another system, this time experienced from the inside as a regular passenger and imaginary art-maker. From Kandinsky and Klee on line and point and the “thinking strings” of San poetry, to 20th century anthropologists Dorothea Bleek and Marcel Griaule, from the mythical menacing giant Adamastor to the pressing modern-day topics of migration and urban terror in Europe and student protests on South African university campuses, from mazes in pencil to sculptures in hair, she makes connections and highlights counterpoints in a wide-ranging conversation. Observed, described, reflected upon, drawn and redrawn from multiple angles – the machine of the world.

The film documents aspects of Katja’s body of work and the creative and conceptual thinking underpinning it, and offers a tantalising and fascinating glimpse into the world and mind of the artist.

the cluster of themes around the interplay of
centrifugal and centripetal societal forces seemed
multilayered, consequential, inexhaustible

The moment chaos becomes society. Among the many intriguing installations, objects, texts, stories and concepts offered for consideration during Katja’s walkabout through the exhibition of her work I attended in December 2016, that was the notion that piqued my interest most, the phrase that stuck in the mind.

At the time I had already been working on Coast for over three years, so I shared many of these thematic preoccupations. This cluster of themes around the interplay of centrifugal and centripetal societal forces, it seemed to me, was both richly multilayered and hugely consequential, containing enough material to be endlessly explored and developed over a lifetime and never be exhausted or lose any of its relevance or impact. What appealed was that Katja was dealing with these at a high level of abstraction, and doing so visually, conceptually and often playfully.

I arranged to meet up with her a few days later to suggest that we embark on a collaborative project of developing these themes further into a feature-length film. She was amenable to the idea, and suggested that we start, as a way of pinning down a shared point of departure, by simply documenting the exhibition she was about to pack up before flying back to Europe. We did so, shooting it in a single day a week later, and the result is the 57-minute film Máquina do Mundo.

the cluster of themes around the interplay of
centrifugal and centripetal societal forces seemed
multilayered, consequential, inexhaustible

We never came to develop this further into the envisaged collaborative feature-length film project. But some months after completing Máquina do Mundo, I was reminded of these themes again one late summer evening on a domestic flight on the final approach into Cape Town International through a hazy dusk, the air thick with the smoke of the mountain fires of the previous days. As we were making the steady descent, the pilot spoke of the fires and delivered the then customary message of the severity of the unrelenting multiyear drought in the region, of the dire state of the dams supplying the city, of the desperate urgency that visitors and locals use water sparingly.

The picture taking shape of the world we were rapidly losing altitude into was arresting, proto-apocalyptic: heat, fire and smoke, water in short supply, dams emptying fast and no prospect of rainfall. There was a sense, in the hushed cabin as we were coming in to land in the city sprawled below us in the gathering dark, of large, sophisticated human systems still operating, but strained and under duress, as beyond these there were even larger and potentially more powerful natural forces at work, threatening disruption, still being held at bay for now, but only just. There was a sense of the possibility of catastrophe. There might be a moment, one could well imagine, when society would become chaos.

It was so strongly evocative of the themes of the film we had made together that I shared the image with Katja in an email afterwards. Little did I know at the time that I would later come to be engaging deeply with the subject of that water crisis, in the work on the Cape Town Drought Response Learning Initiative and the Day Zero film – both of which are thematically direct linear extensions of the work with Katja, continuing the examination, exploration and development of the themes of Máquina do Mundo.