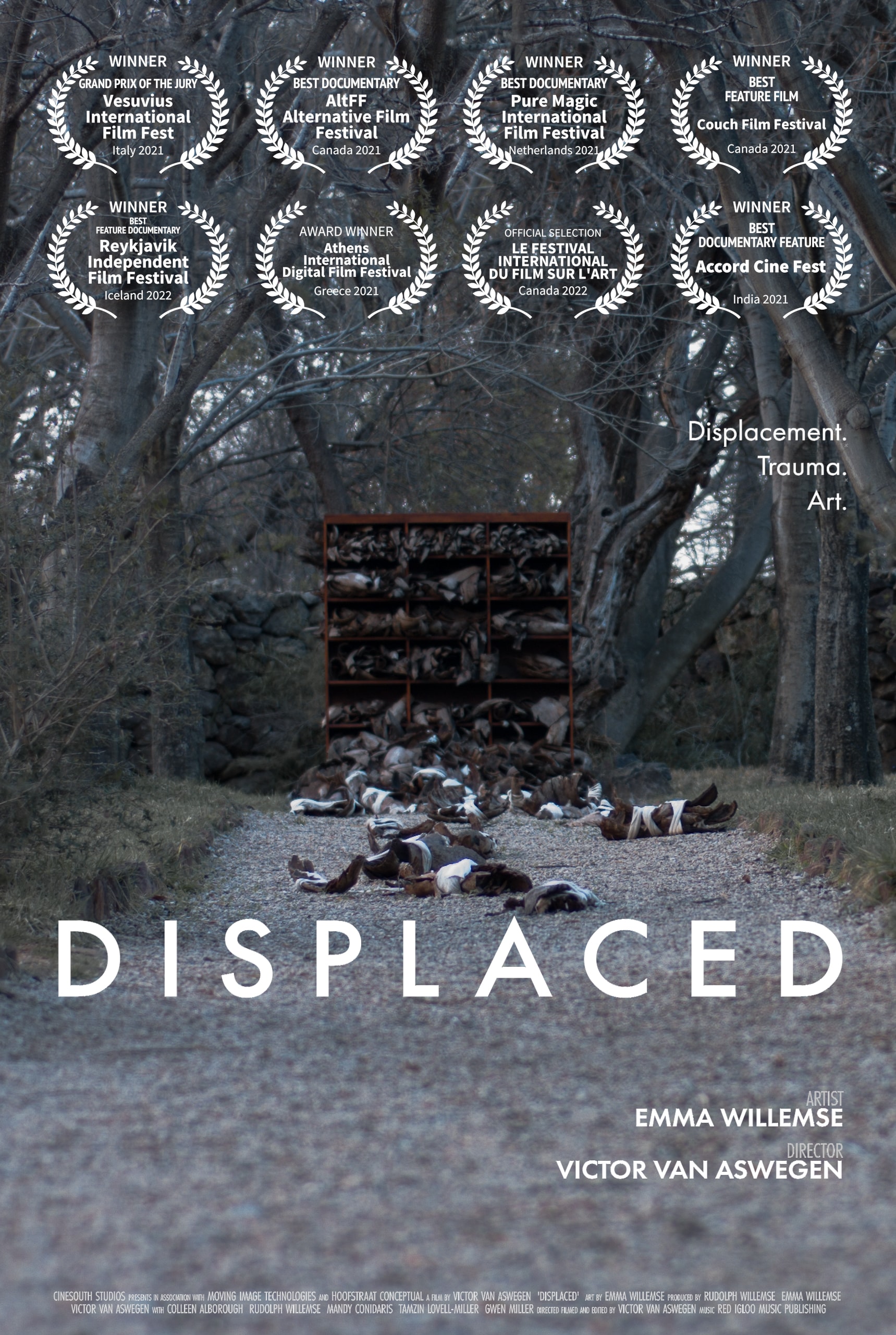 The traumatic experience of the forcibly displaced. The construction of meaning in the artmaking process. A retrospective of the work of an artist.

Displaced is a retrospective of the oeuvre of artist Emma Willemse who has, in her academic and creative work across a number of genres and media, for more than a decade been dealing intensively with the themes of home, the loss of a home and displacement. Apart from the Western Cape where she is based, she has exhibited in Dakar, Florence, Johannesburg and Paris, and her extensive body of work includes moving, magisterial pieces featured in the film.

Often working with the traces of habitation left by the displaced, the marks remaining on the landscape after the departure of those who are now absent, she has sought to explore the connections between land-and-home, identity and memory, and how the trauma of displacement from a home manifests in fractures, lacunae, absences in memory and identity.

Her interest in these themes stems from personal experience when she lost several homes in the 1990s, and her work is focused on the subjective experience of displacement. Tracing the arc of her creative output over the years and contextualising it against local and global realities, the film is a profoundly empathetic engagement, refracted through art, with the traumatic experience of the forcibly displaced.

Through scenes of the artist at work, cinematic set pieces presenting her work, and interviews with academics, gallerists and critics, the intriguing relationship between materiality and meaning is explored: how we imbue objects with meaning both in the artmaking process and in life, how the layers of meaning can be unpacked in almost archaeological fashion, and how the deep engagement with a great, richly layered work of art can rank among life’s most rewarding experiences, adding to our high-level understanding of the world, and helping to guide our actions through its manifold, daunting complexities.

“Like all great art the film operates on many levels”

“The vocabulary describing fine art is often abstract, self-indulgent and annoying. One of the great strengths of Displaced is that it cuts through, deconstructs and makes concrete that conversation. Like all great art the film operates on many levels. It is a wonderful and clear description of the development of Emma’s work; a beautiful piece of visual art in itself; a thoughtful examination of the relationship of art to social and political issues and challenges; an analysis of the psychological impact of displacement. The music is terrific and the expert commentary – almost exclusively from a group of intelligent and articulate women – holds our attention as an audience, teaches and enlightens us.”

“Has a distinct filmic voice”

“Has a distinct filmic voice, really gets one to engage with Emma’s art, the interviewees work not only with information but bring a meditative quality which places you in a space to experience the art. I also appreciated the silences in the film and the music.”

“An important film for our time”

“An important film for our time. Explores themes of displacement and loss at both the personal, micro and macro level. It provides vital commentary on the displacement and painful predicament of refugees around the world. I found it to be an elevated and cerebral visual sculpture pregnant with meaning. It provokes important discussions on human displacement, loss of home and fragments of our memories.”

“An elevated and cerebral visual sculpture pregnant with meaning”

The International Festival of Films on Art
Official Selection
2022
Canada

there are three parallel progressions
that drive the film forward, relating to
art and artist, art and world, art and meaning

One of history’s abiding themes is the forced displacement of people from their place of settlement, sometimes by natural events, more often than not by some form of violence perpetrated upon them by other humans. The subjective, traumatic experience of the loss of home – one of the two main subjects of this film – is an experience as ancient as the human sense of home itself, of rootedness, connection, belonging to a place.

It is also, in our time, the lived experience of more people than ever before. When we started principal photography on Displaced on 9 August 2017 it was against the grim backdrop of a record 65.6 million people forcibly displaced from their homes. Never before, reported the United Nations High Commissioner for Refugees, had so many people been affected by displacement, having fled persecution, conflict, violence and human rights violations.

The number of refugees, those who had crossed international borders in search of safety, then stood at 22.5 million, a further 2.8 million were seeking asylum in foreign countries, and 40.3 million people were internally displaced. After being broadly stable around the 40 million mark during the first decade of the century, in the first half of the 2010s the size of the global forcibly displaced population was on a distressingly steep upward trend to unprecedented levels, the ranks of the displaced growing by more than fifty percent over a short period of time, driven mainly by the civil war in Syria.

there are three parallel progressions
that drive the film forward, relating to
art and artist, art and world, art and meaning

As ever, immense human tragedy underlies the stark statistics. The UNHCR’s annual Global Trends reports always make sobering reading. The 2017 edition was no exception. Children were overrepresented: only 31% of the world’s population, they made up more than half of the forcibly displaced. The number of newly displaced was high, 10.3 million people becoming displaced in 2016 – equating to one more person being displaced every three seconds, or twenty per minute, for every minute of the year, a barely imaginable 28,000 people newly displaced every day.

From Syria and Palestine to Colombia and Afghanistan, from Iraq to South Sudan, a human tide of millions opted for the perils and hardships of flight rather than staying rooted to places, lands and homes where carnage and cataclysm had finally rendered daily life devastatingly unliveable, where they had become desperately unable to envisage any semblance of a viable future.

Engaging with the subjective experience of the loss of home in her work is the task artist Emma Willemse had set herself since the 2000s. The film, being a retrospective of her body of work over this period, consequently has a dual focus, carrying through from start to finish, and imparting a particular depth, resonance and tension that it seems to me it would not otherwise have had: on the one hand, it is an empathetic engagement, a persistent quest for a felt understanding of this subjective experience of the displaced, and simultaneously on the other hand it’s an ongoing reflection on the nature of art and artmaking.

Having understood that the film operates on both these levels at the same time throughout, continuously developing in parallel both of its two main subjects, the next question was what would propel it forward. The answer was threefold.

First, art and artist. The narrative through-line of the film – an obvious one, given that it’s a retrospective – is the story in chronological sequence of the artist’s conceptualisation and creation of the artworks, and how this process is embedded in pivotal events of her personal life over this period of time.

Second, art and world. While telling this personal story rooted in the private sphere of the artist, the film draws the connections between the artworks and the public sphere, the wider world of society and contemporary history. It does so – also in chronological sequence – in ever widening circles, starting with a small mining settlement in the southern African interior to which the artist has a personal connection through her husband’s parents and grandparents, to apartheid-era racially motivated forced removals in South Africa in the 1960s and 70s, to eventually the European migrant crisis that reached a climax in 2015 and 2016 – an ascending line of jeopardy and rising stakes, a rippling outward of scale, impact and modern-day relevance, to coincide ultimately with global news headlines of the day, with what the Financial Times, in a quote I ended up using in the trailer, has called “one of the major geopolitical themes of our time – the movement of people across national borders”.

Third, art and meaning. Through scenes of the artist at work, and art commentators articulating steadily deepening reflections on the nature of artmaking, on materiality and meaning, the film explicitly concerns itself with the human ability to construct meaning, imbuing objects with meaning, either in the making of those objects in the case of an artist, or in the viewing, understanding and appreciation of those artworks by others.

These three parallel progressions hold the film together and drive it forward: a line of personal and creative chronology, a set of widening circles of displacement events, a series of deepening reflections on art.

That is why, despite the crushing weight of forced displacement through the ages and the vast numbers affected by it today that set the backdrop, the film ultimately is not bleak. Because arrayed against our extreme vulnerability and exposure as physical beings existing in a world of objects, leaving us fatally open to all sorts of hardships and trauma, including those inflicted on us by others of our kind, we have a powerful, uniquely human, counter: our ability to construct meaning.

Which is also why, on reflection, the two main subjects of the film – the traumatic experience of the forcibly displaced, and the nature of art and artmaking – are revealed to us finally as one, standing to each other in the simple relation of tension and resolution, question and answer: the passive experience of events, to which we bring the active construction of meaning.

And so this is also why, along with the end credits … but that would be a spoiler, wouldn’t it? For that, you have to watch the film.