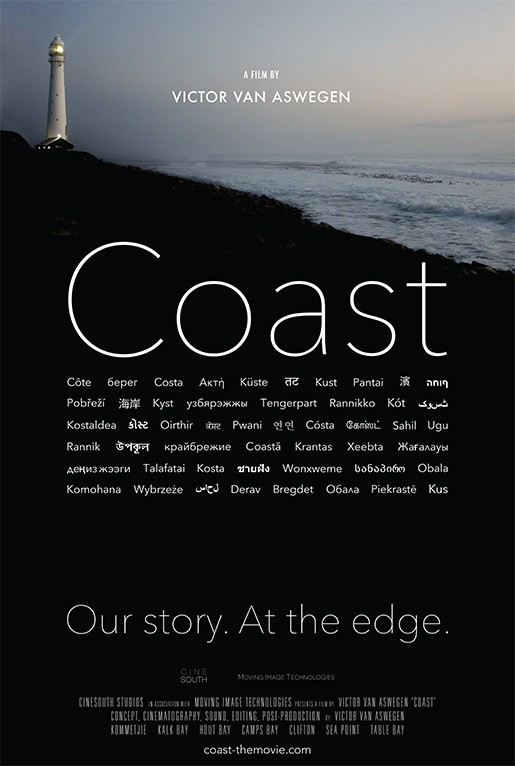 Coast tells two stories in parallel: the story of the human life-cycle, from childhood to romance to eventual parenthood, and simultaneously the story of humanity’s transformation of the world, from sleepy faraway village to high-rise density and sprawling post-industrial metropolis. Poetic and lyrical, it follows ordinary everyday events from first light to nightfall over seven days in seven famously photogenic Cape Town coastal locations. It was shot over a four-year period and is currently in post-production.

It was only in our time, as recently as 2007, that humans became more urban than rural for the first time – a long haul over the six thousand years since the proto-city-states of Mesopotamia, and a statistical milestone in our collective, accelerating trek to the city. Coast traces this most pivotal of arcs in humanity’s history, from faraway village to high-rise density and post-industrial sprawl.

Simultaneously and in parallel, the film depicts the primordial cycle of procreation, from childhood through young adulthood and romance to eventual parenthood.

It tells these two stories through the portrayal of mere ordinary events over seven days in seven spectacularly scenic locations around Cape Town, from first light to nightfall.

It does this without dialogue or voice-over, with simple locked-off shots of scenes from everyday life, in the manner of the Lumières, consciously harking back to the origins of cinema.

Made without cast or crew, and cut from footage gathered in close to two hundred shoots undertaken over a four-year period, the film is set consecutively in Kommetjie, Kalk Bay, Hout Bay, Camps Bay, Clifton, Sea Point and Table Bay.

Devoid of any spoken language, and using only undirected action and unprompted naturally occurring sounds, together with music, the film is poetic and lyrical. Visually stunning, it uses the simplest of means – everyday life scenes in local settings – two tell its two grand, universal human stories.

For about three years in the late 1920s Soviet-Russian director Dziga Vertov was out and about all over Moscow, Kiev, Kharkov and Odessa, with his cinematographer-brother and their film equipment, gathering footage for what would become the landmark silent documentary Man with a Movie Camera, released in 1929.

Half a world away in the greater Cape Town area and almost a century later, starting in June 2013, I embarked on a similar undertaking that would also stretch out over years. My digital 21st century gear, initially 2K, then 4K, may have been markedly different from the Russian brothers’ ‘cine-apparatus’ – the ‘kino-apparatom’ of the film’s title – but the activity was essentially the same: capturing moving images of scenes from everyday life in an urban setting.

I was deliberately pursuing both a shooting style and subject matter that looked back even further than Vertov, to the very origins of cinema – those characteristic locked-off shots of scenes from everyday life made by another pair of brothers, the Lumières, in the late 1800s, showing workers leaving a factory, photographers with their cameras disembarking from a riverboat, people jumping off a pier into the sea.

But with these key specifications – the static, locked-off camera, the urban setting, the scenes from everyday life, the absence of actors, no spoken language whatsoever – the similarities end.

Because the task I had set myself – the animating idea underpinning the film, and also the challenge in the making of it – was that all these disparate shots had to be woven into a story. Or rather: two stories told in parallel. So all these scenes of ordinary actions and events from everyday life, all unscripted, undirected, unacted, nothing staged, and all without language, had to be shot and then cut together in such a way that they would tell these two grand human stories: childhood to parenthood; village to city.

So the intention was to be minimalist and maximalist simultaneously. Minimalist by creating and presenting what is on the surface, in the first instance, only a series of pretty pictures from some stunningly picturesque places depicting mere ordinary everyday life. But, while and by doing this, also ambitiously maximalist, telling these two sweeping, remarkable stories of human unfolding, at the family level and on an urban scale.

The film invites the viewer – the viewer willing to play the game, that is – to see the ordinary, and the epochal; the merely quotidian, and the archetypal.

To reinforce the structure, but adding another layer of challenge to the filmmaking, I decided to have each of the seven days of the film, each of which is set in one of the seven locations, revolve around its own thematic focal point, every day emphasising a different aspect of the human story. The film does not spell out these themes explicitly. It’s up to the viewer to join the dots, to decipher what the theme is on each of the days.

This made for a fascinating and ongoing interplay, in the shooting of the film, between openness and structure, randomness and determinacy: between always only capturing events that would have taken place regardless of my presence or absence at the location on the day, and therefore random in that sense, and on the other hand first gradually discovering possible themes – through the open-minded shooting at a location, without preconceived ideas as to what the theme would be – then gradually assigning a theme to a place, and eventually getting the events captured at each place to fit the thematic mould assigned to that place.

By its nature, this was an enterprise that entailed returning to the locations again and again. With zero control over events, weather, or lighting conditions, it required a willingness to venture out repeatedly to these settings, with the gear, an open mind, a keen eye, and – given the early-morning and into-evening nature of the work – a warm jacket.

A high shoot ratio was inherent to the nature of the project. As was the willingness often to get up at 3.30 am, get ready and drive out to a location on the other side of town to get there and set up to be ready for shooting before first light, work for a few hours, drive back, download, render and review, only to find … nothing usable – and then the willingness to repeat the process next morning. It took close to two hundred such outings to gather the images and sounds for the film. Kalk Bay alone, as an example, on screen for twelve minutes, took 33 shoots over 21 months.

Coast has a narrative intention. Which means it is not in the tradition of non-narrative works such as Koyaanisqatsi and the subsequent films in the Qatsi trilogy, or Baraka and its sequel, even though, like these films, it is also non-verbal. In Coast there aren’t any slow motion, time-lapse, or aerial shots. There’s no portrayal of cultural exotica or a tone of sociopolitical critique. The approach, instead, is impassive, unblinking observation in the shooting, with structure and emotion, form and feeling imparted in the edit.

Coast is also a celebration of the modern-day democratisation and dispersal of image-making technology, where everybody with a smartphone is instantly a photographer and videographer. Vertov’s film frequently shows his younger brother, spindly tripod perched over the right shoulder, in action in the urban landscape, as the ubiquitous film camera operator of the title, because the director deliberately put him in the frame. Wherever I went, the landscape was naturally populated with image-makers of all stripes, now appearing in the film. Vertov’s point about the unlimited portability of the camera was not yet quite true in his day but has become decidedly true in ours – so ultimately the equivalent of the ‘man with a movie camera’ in his film becomes in mine also all those photographers captured in action, making still and moving images of this beautiful place and the human lives within it, on each of the seven days, in each of the seven locations of Coast.

We all come from the sea. The coast is a formidable border we crossed a long time ago to become land-based mammals. The coast is where we started the journey that led eventually, for better or worse, to the colonisation of the earth by our species. It is the place from where we set out to become ultimately, for now at least, the unchallenged, hegemonic force driving the planet’s destiny. So the coast is always a good place to return to for a contemplation of how we got to this point, and where we’re heading.